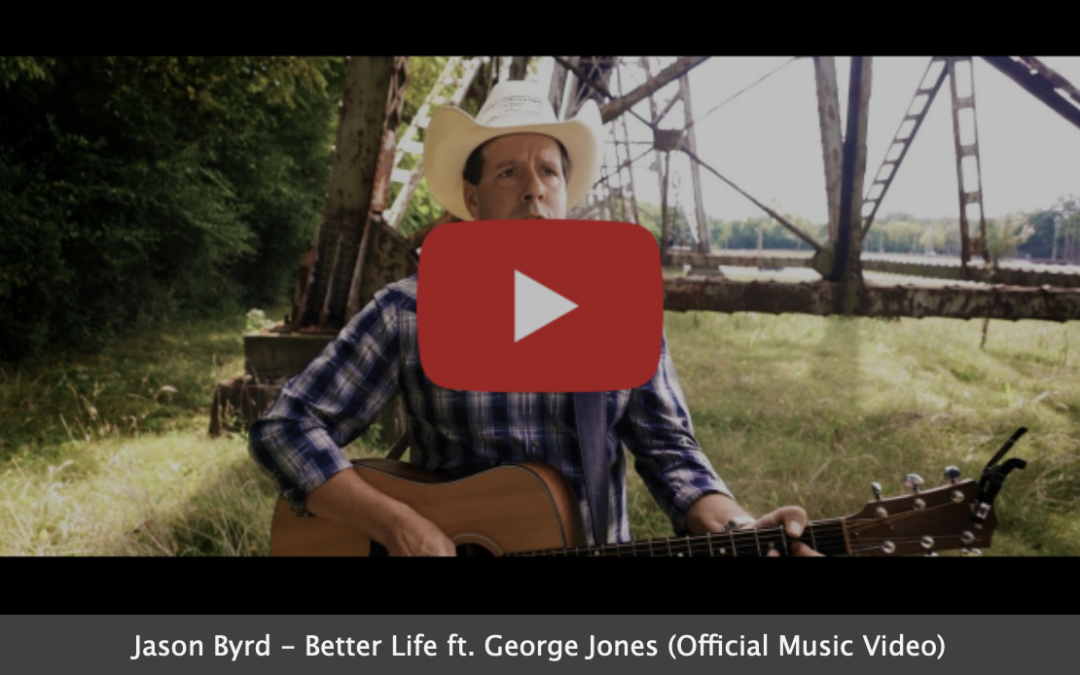 NASHVILLE, Tenn. – Country singer/songwriter Jason Byrd touches hearts with the release of his music video for his latest single, “Better Life,” featuring George Jones. The beautifully crafted video showcases a love story from beginning here on Earth to ending with the reassurance of peace in Heaven, taking the meaning of the lyrics to a whole new level of emotion. Byrd, strapped with an acoustic guitar, highlights the simple pleasures of life that have the power to change it in the most extraordinary ways. Viewers are able to feel the sentiment of the tune through the video as well as Byrd’s incredible talent and Jones’ legendary voice. The world premiere of the “Better Life” music video was featured by Heartland TV and online by SCENES Sessions, and is available to download and stream on all digital platforms now!

“I am so excited to have the new music video for “Better Life” available,” shares Byrd. “Thank you, Heartland for premiering the official video on television and Scenes Sessions online. I’m happy to have finally released my first music video and I hope that everyone will enjoy it. Keep it country!”

Byrd’s relationship with the legendary George Jones began when Byrd was chasing his musical dreams in the early nineties. The two developed a close friendship as Jones was someone Byrd had looked up to for most of his life. Jones opened many doors for Byrd, taking him out of the local honky-tonk scene to significant milestones, playing large stages nationwide including The Grand Ole Opry, and opening for some of country music’s biggest names. The release of “Better Life” allows Byrd to honor his friend and gives fans the chance to hear a special, never-before-heard recording with Jones one last time.

For more information and everything Jason Byrd, please visit jasonbyrdmusic.com.
Facebook | Twitter | Instagram
About Jason Byrd:
Jason Byrd was just 19 years old when he followed in his family’s footsteps and became a fireman. But there was another fire that burned within him, and that was music. In the early nineties, Byrd found himself balancing a career in the fire department with a career in Music City, traveling the 490 miles each way with the determination to make both of his dreams come true. Yet, in many ways, it wasn’t until the day that Byrd met the legendary George Jones that the trajectory of his entire career forever changed. Soon, small gigs at local bars and honky-tonks turned into major opportunities on stages across the country, opening for powerhouse artists such as Tracy Lawrence, Loretta Lynn, and Dierks Bentley. In the summer of 2019, Byrd made the decision to retire from his position as the Battalion Chief with the Tallahassee Fire Department. But his musical story was far from through. Byrd recently made the decision to finally resurrect an unreleased song he and Jones had worked on together many years ago, a song that is now his current single “Better Life.”
# # #
Suggested post:
Jason Byrd (@JByrdCountry) releases music video for #BetterLife featuring @GJPossum today! Music video premiered by @WatchHeartland and @ScenesMedia #GeorgeJones